One of the biggest box office movies of the 90’s gets an awesome sequel.. from The Asylum. They’re well known for their high quality films, like Snakes on a Train, so you know this is going to be terrific.

It would be really easy to write all the negatives about this movie and not focus on the positives – so that’s what I am going to do! Because quite frankly they didn’t get much right. 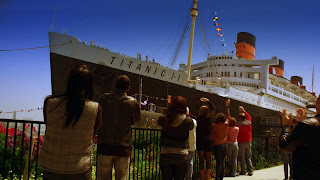 The special effects crew knew it was doomed!

Firstly under no circumstance would you ever name a ship the Titanic 2 – that’s just asking for trouble. And how is that its privately owned by some young whippersnapper with a bevvy of ladies surrounding him?

Titanic 2 is about the maiden voyage of the new Titanic ship. Its also an environmental disaster movie, but too bad the writer didn’t see that! A massive iceberg breaks off the shelf of Greenland and causing a massive tsunami in the Atlantic Ocean.

The Titanic. An Iceberg. Legit, I didn’t not see that coming.

Luckily for our heroes of the movie, Hayden and Amy, Amy’s dad just so happens to be investigating the iceberg, AND has a helicopter on route to save the day. Except he doesn’t and Hayden dies. 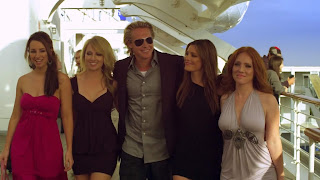 Hayden and the ladies!

Lets talk about the effects, because I love doing that. Now, I am not going to say too many bad things about them, because one day I hope I can do the effects for a movie, but wow they are bad. I wonder if Adobe knew that After Effects would be used for evil like this?

Some of the compositing effects are just bad. The exterior shots of the Titanic are obvious CGI, but without any lighting to make it look natural. Stock footage is used all over the place. Sets that don’t resemble the inside of any ship ever made are used as interior shots. This must be pointed out: there are a few shots where Hayden and Amy are walking down wide concrete hallways. On a ship. Let that sink in. Wide and concrete. I’m no engineer, but concrete on a ship seems like a bad idea. 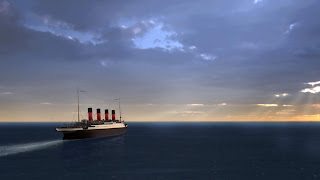 If you enlargen the photo, you can see the perspective grid the
effects crew used in the software. Usually you delete these BEFORE
the movie is finished guys!

And then lets talk about those interior shots. I would assume the Titanic 2 would be elegant, yet that opening ballroom scene was either shot in a school gym or the conference room of a cheap hotel. The furniture is tacky, the signs are just made of paper, the staircase has no opulence and the “ship” shows complete signs of wear and tear. Not good for a maiden ship.

Should you watch it? Well yeah why not – I’ve put a link below to a free and legit online stream of the movie in HD. Fall in love with those effects like I have!