On the weirdness scale of Shaw Brothers horror films, this one isn’t actually weird at all. But it is very campy/ridiculous so keep that in mind.
Clearly shot on a sound-stage but with improved visual effects, this movie tells the story of a not-so-wealthy-anymore woman who lives with her I-married-into-a-rich-family abusive husband. He is a real asshole. She is sick, but he thinks she is faking it for attention. 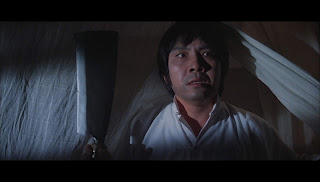 One day their remaining servant leaves and coincidentally a mysterious lady arrives claiming to be the daughter of a previous servant. She askes for a job, but the woman says she can’t pay her. But that’s ok, she is willing to do it for free as gratuity!

One night servant is on the receiving end of one of the husband’s violent episodes – and after this servant and wife plot husbands demise! And it works (trust me, you’ll be cheering this bit on!)

But, as tends to happen in ghost story movies, the wife is suddenly witnessing the ghost of her late husband. This drives her insane, and with the help of the servant, to death! Who could have seen that coming? 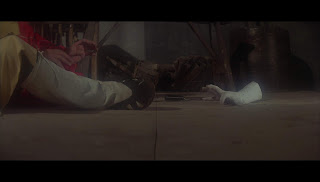 After The Addams Family concluded,
the Thing needed to do something to pay the bills

But wait, there’s more! A second twist is then followed by a third twist. A quite a great pay-off if I must say. Well as great as a movie like this could be anyway.

Worth paying attention to a throw away piece of dialogue around the start of the movie when the wife mentions she has sister who may or may not look almost identical to her. It’s part of the pay off.

So, campy 80’s Hong Kong horror flick – what’s it got going for it. Well as you can see from the pictures it has upgraded visual effects. No more stop motion skin melting here!

But the truly awesome/bizarre scene belongs to the witch doctor and her “assistant” – and I mean “ass”istant, because in what can only be described as a win for exploitation lovers everywhere, there is absolutely gratuitous five-minute long naked dancing scene. I am not one to complain about stuff like this, but even I thought it was getting a little too long. If you’re a scanner, its towards the end, but seriously the whole movie is worth watching.