Special big thanks to Brian at Asian Film Fans and to Well Go USA for the preview video used for this review.

With China now well and truly established on the world stage as a cinema powerhouse, this is the type of movie we knew was coming – an over-dramatized action thriller based extremely loosely on the source material – that being the successful Chinese expeditions of Mount Everest in 1960 and 1975.

Gelling it all together is the current darling of Chinese cinema – Wu Jing, alongside a Chinese cinema veteran in Zhang Ziyi. There’s even a cameo from Jackie Chan to top it all off.

But can all this star power, alongside the might of the new generation of Chinese cinema, translate to a movie worth your time? Well read on to find out 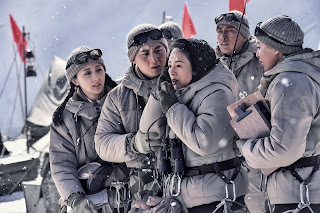 The Climbers is based on the true story of several successful Chinese missions to conquer Mount Everest, but in true cinema fashion the screenwriters have injected much required drama, tension, action and romance in the movie. Which is a bit of a shame as it’s ended up relegating the real story of these climbs to nothing but footnotes in the end credits.

In real life, the two climbs are unrelated, however in this movie, our hero – Fang Wuzhou, played by Wu Jing, is the connection between the two stories. Alongside his two comrades, their original climb in 1960 was not classified as being official due to the fact they were unable to provide photographic evidence. This supposedly brought great shame to China, and resulted in Wuzhou withdrawing from the public sphere and working in a factory.

Forward to 1973, and the Chinese Government re-establishes their mountaineering division, and enlists (demands?) Wuzhou and his comrades, Jie Bu and Songlin, to train alongside a new generation of climbers to tackle the Mountain again. 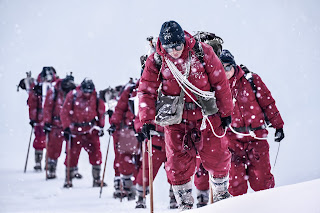 By 1975 they are ready, taking their chances on the narrow window of opportunity.

So where does Zhang Ziyi fit into all of this? Well conveniently, she plays the role of Wuzhou’s love interest Ying. Their feelings are mutual, but they can’t seem to tell each other that. A plot twist sees Ying sent overseas to train in a meteorology college, where her skills as a meteorologist will come in handy to save the day.

I’ve always said that the Chinese have this habit of overdoing their stories and making them confusing to the point of non-sensical. They’ve kind of done it again here – and the real shame is that the real stories of the real climbs were probably interesting enough on their own without the need for all this drama and embellishment. 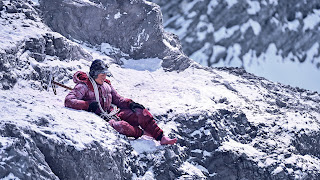 But the movie has to ‘movie’, and it ‘movies’ very well. It’s straight out of Hollywood from the late 90’s just with much better special effects.

What’s not welcomed is the forced drama and romance plot lines. The end of the film sees 2 failed climbing attempts, including a dramatic death, that didn’t need to happen. We could have saved 30 minutes of screen time without it – or that 30 minutes could have been used to more effect to make the successful climb more exciting. Then on top of it is the forced romance scene between Wuzhou and Ying that’s more annoying than touching.

Just like with The Wandering Earth, a complete suspension of belief is needed to enjoy this film – I recommend you watch it with cinema lover eyes rather than critic eyes, and you’ll be in a for good ride. 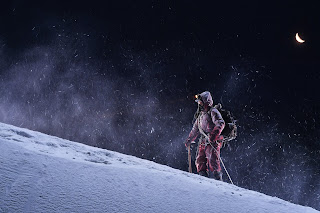 Helping out are the great special effects, stunt and wirework. Thankfully the wirework is more like Wolf Warrior (good) and less like Master Z Ip Man Legacy (bad). Even the parkour scene is pulled off with some degree of realism. Although it has to be mentioned, some of the jumping and flying stunts on the mountain just feel out of place. It’s like trying to squeeze Crouching Tiger Hidden Dragon into Cliffhanger – it just feels wrong.

But I like where Chinese cinema is heading. And I like Wu Jing. Over the next few years we should expect to see more and more blockbusters like this come out of China. I just hope we get improvements to the story and script writing that might make it more palatable to a worldwide audience, because everything else is already there.