There wouldn’t be a single person on the planet who dislikes Jackie Chan and/or his movies. They’re always fun little, inoffensive romps with the classic good vs bad guy, plenty of stunts and lots of action. But lately, Mr Chan’s output has been a mixed bag. For every “The Foreigner” there is a “Karate Kid”. And Bleeding Steel is definitely in The Karate Kid category.

Chinese movies, especially action movies, are not known for coherent plots or storylines that make sense. Plot holes are as obvious are they are common and as a viewer you’re just expected to keep up. Usually that means forgetting what the movie is about and enjoying the action – but there is something so fundamentally wrong with the action in this film that makes it impossible to do that. 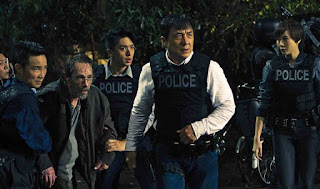 Everyone's all so serious

To sum up a ridiculously convoluted and unnecessary story line, Jackie plays a Special Forces Agent whose tasked with defending a scientist who has made a mechanical heart (that seems to run on unlimited energy), and when that fails and his daughter almost dies, the heart is used to save her life. Only it wipes all her memories as well. So he ships her to Australia to live as an orphan while secretly protecting her from a very powerful gang leader who travel the world in the Starship Enterprise. It takes this gang about 13 years to find his daughter, even though they seem to have some of the most sophisticated technology in the world and she seems to have a tracking device built into her that makes it easy for Chan to find her. 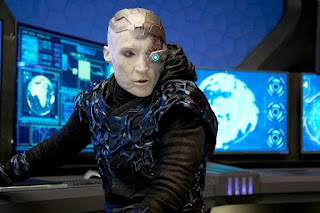 Yes, this is the same movie!


Writing that paragraph hurt my head. Thinking back about how ridiculous this movie is hurts my head. And then to top it off, there is some light comic relief (which seems far too prevalent in Chinese cinema that it has to be some kind of Eastern trope the rest of the world is unaware of) provided by Show Lo (Taiwanese heart-throb) that really seems out of place.

For us Australians, we get a strange view of Sydney which doesn’t make too much sense, and the abuse of an all time favourite actor in Kym Gyngell (Mother and Son) as clumsy, loopy doctor. 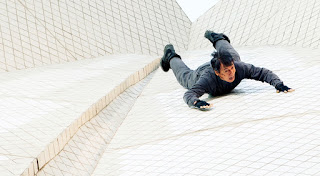 Sliding down the Opera House, obviously

On the plus side, the action is your standard Jackie Chan affair, meaning lots of action and stunts. And, as usual, the highlight of the movie is the blooper/behind the scenes montage that runs over the end credits – entirely in Mandarin.

This one is really only for fans of Jackie Chan.
Posted by Arty Dans at 20:02