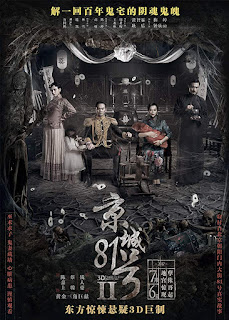 Yaoyao invites He Fie to live in the house so she can be close to her husband, and one night while exploring the house she discovers a room that belonged to the original house’s family doctor. She discovers that he was experimenting on pregnant women in an attempt to ensure the lady of the house became pregnant with a baby boy.

Simultaneous stories are told at the same time involving the present day characters and the ones from the past – General Zhang Zhisheng, his wife Niu Menghua and new bride Ji Juncui. The General is forced to divorce his wife (Niu) and marry the daughter of another general (Ji) to ensure he can keep control of his district and also to produce an heir – as Niu has failed to provide any children. One day the family doctor (Ruxun) provides Niu with an opportunity to win her husband back – he believes that with the use of an unborn placenta he can ensure she can become pregnant. She rejects the idea as abhorrent, not wanting to be involved in the death of innocent women and children, however Ji, desperate to win her new husband’s affection, accepts the deal.

In order to ensure Niu is forever out of the picture, they inform the other generals that Niu is responsible for the murder of 8 pregnant women in the district. The townspeople, angry and after revenge, converge on the No. 81 mansion demanding punishment. Zhang, not wanting to believe the stories but unable to find evidence of her innocence, executes Niu, trapping her spirit in the mansion and ensuring misery for all occupants.

Compared to most Chinese horror movies, this one is well made and with minimal plot inconsistencies. A clever use of actors by having them play dual roles as both past and present characters is well done and is used to highlight the similarities in situations and personalities between the characters.

The filmmakers seem intent on creating a franchise out of this series, but it remains to be seen how that can be pulled off. So far, having two movies with unrelated plotlines has worked out well, and definitely this movie could have stood on its own without having to rely on the previous movie for recognition, however its starting to have a very Amityville kind of vibe – and that’s a bad thing. Let’s hope the filmmakers can quit while they’re ahead before they tarnish the reputations of these two films.
Posted by Arty Dans at 14:40