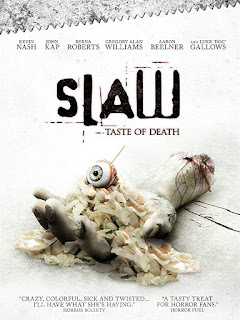 Everyone loves a silly movie every now and then right? Well this could be that silly movie that just stops you from watching more silly movies for a little while!

Plot? Story? Yes there is something there, about two brothers – one who is very large and the other who is very short, who have kidnapped 7 people. What did these people do wrong? They’ve upset/offended the brothers at eating establishments. 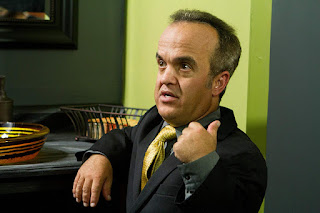 
Using the basic premise of most Saw movies, the 7 victims are locked in a room, chains around their necks, and then called one by one to discover why they’re there, and what penance they will face.

But this isn’t a horror movie – no no it’s a “comedy”. And yes, some bits are funny. Like when the actors deliver their stilted dialogue, or when the clean After Effects works is shown on the screen. Or that one moment where the actors are out of focus. Not sure why that bit made the cut. 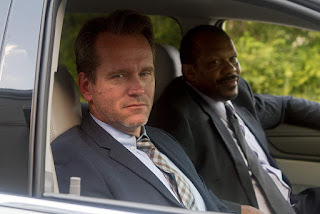 It's Detectives Turner and Hooch... yep, like the movie

Looking for these victims are 2 police detectives. Well actually, they’re really only looking for one of them, they just discover along the way that there are more!

You may have noticed that the movie is called Slaw – as in shorthand for Coleslaw. One of the brothers loves it, its his favourite food, so fittingly it’s used a device to torture the victims. And often with quite hilarious results.

We shouldn’t begrudge that movies like this are made. On the contrary, this production gave people jobs and experience – vital in the film industry. We should begrudge when movies like Skyscraper and Rampage are made. They’re the real embarrassments, not this film. 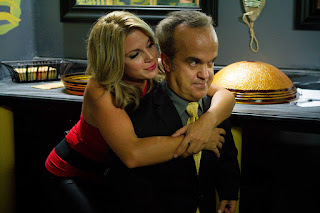 It’s also clear the crew, or at least the director, has a fascination with wrestling. Nice to see Kevin “Big Sexy” Nash in the film. What they could have laid off was all the “racist” talk – when you keep using the r-word in the script and throw it around all the time, it becomes less funny and more eye rolling.

Oh, and nice twist at the end, even if it was telegraphed mid-way in the movie, it was still a nice surprise.
Posted by Arty Dans at 01:01