I found this movie while browsing at my local ‘movie store’ in Guangzhou one afternoon, and decided “Hey with a title like that, lets find out!”

And here’s the thing about movie titles – boy, oh boy can they be misleading. Little did I know the title was more euphemism for “murder mystery” and not a character name. Well, consider me schooled. Genius marketing from the publicity group on this film.

Because that’s kind of what this movie does. It likes to cock-tease (see what I did there?) you with plot points, with information and other such red herrings. Just when I thought I had figured out what was going on, the same scene was shown again from a different angle and that threw everything up in the air. 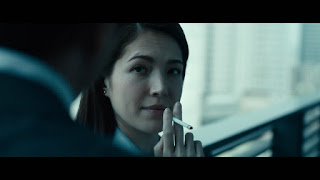 "I am also a serious journalist"

A young journalist was the only witness to a fatal car accident one rainy night. He had managed to take a photo using his digital camera, but you know early 2000’s digital camera tech wasn’t all that great, so he didn’t end up with the best pic. Lo and behold those pictures disappear.

Fast forward a few years and journalist gets fired from his job after reporting about a scandal that wasn’t a scandal. His mentor at the newspaper retires and there is no one left to save his bacon.

He starts looking back into the car accident he witnessed many years prior due to a series of “OMG ONLY IN THE MOVIES” set of coincidences that will leave you scratching your head in disbelief. Taiwan has a population of around 24M people, yet the 10 or so people this journalist knows all seem to be connected to this case!

"Serious joutnalists smoke 2 at once"

Lazy writing aside, this movie suffers the same fate as all Chinese/Taiwan/HK movies that try to go too deep in building a story – its full of plot holes and things move too quickly, usually to hide the plot holes.

And to top it all off, the end of the movie will just leave a bitter taste in your mouth. The title of the movie deserved something better to have its name associated with. Watch it, but don’t take it seriously.


Pictures from IMDB
Posted by Arty Dans at 19:19