Sometimes a movie just has to have a good title to make you want to watch it – this is definitely one of those films. Look at it - it's awesome!
Firmly in the Japanese z-grade of horror films, this T&A gore fest does nothing new to a genre already full of ridiculousness, but you don’t care because that’s not what you want to watch this film. 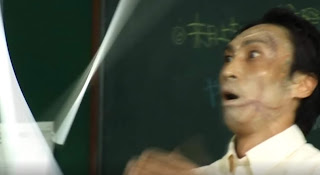 As far the usual effects and gore go – you just need to look at the year of production to know what you are getting yourself in for. The computer effects are low quality, the gore effects are nothing better than a few rubber arms from a discount store covered in copious amount of watered down movie blood.

And let’s not get started on the obvious school girl with breast implants.

You don’t care about the story of this movie – and let’s face it, it doesn’t make sense. There is blood, there is violence, there’s lots of Japanese girl nudity and there are ridiculous effects. Done and dusted. Enjoy the short 80 minutes.
Posted by Arty Dans at 18:55